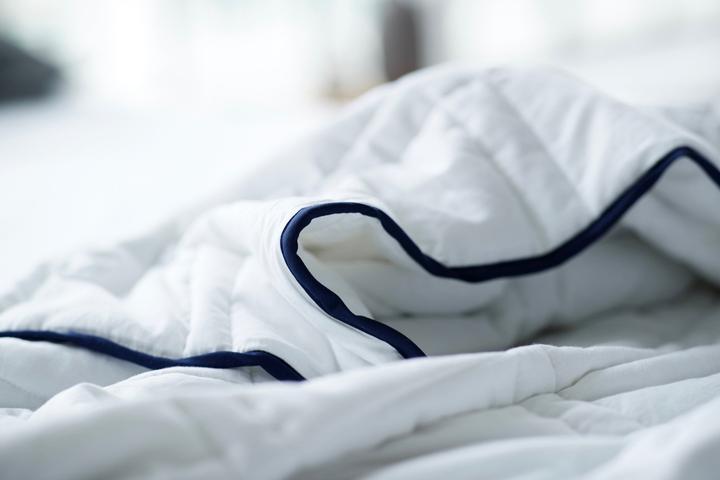 Weighted blankets gently hug the body to create the comforting benefits DTP therapy. It creates a safe, cozy cocoon to relax in and calms the mind and body for deep, natural sleep.

13 Benefits of Using a Weighted Blanket

According to Harvard Medical School research, “sleep problems affect more than 50% of adult patients with generalised anxiety disorder”. Having anxiety can cause sleeping problems and make it difficult to sleep, but sleep deprivation can also trigger anxiety. Weighted blankets can help break this poor sleep cycle by providing physiological and psychological benefits that help alleviate anxiety.

Another well known benefit of weighted blankets is their positive effects on sleep. Many people find them to be helpful in inducing sleep and improving sleep quality. A 2015 study from the Institute of Neuroscience and Physiology, University of Gothenburg, Sweden says “Objectively, we found that sleep bout time increased, as well as a decrease in movements of the participants, during weighted blanket use. Subjectively, the participants liked sleeping with the blanket, found it easier to settle down to sleep and had an improved sleep, where they felt more refreshed in the morning. Overall, we found that when the participants used the weighted blanket, they had a calmer night’s sleep.”

The pressure from the evenly distributed weight of the blanket activates the parasympathetic nervous system, switching the body’s from fight or flight response to the rest and digest response.

Serotonin is an important chemical and neurotransmitter in the human body. It is believed to help regulate mood and social behaviour, appetite and digestion, sleep, memory and more. Weighted blankets have been shown to increase serotonin in the body according to Occupational Therapy and Mental Health. Serotonin is also required to produce melatonin which is associated with easing into natural sleep.

5. Comforts and Calms Children with Autism

The first known use of weighted blankets was to lessen negative symptoms for those with autistic spectrum disorder (ASD). The blankets were used to mimic touch therapy by administering a squeezing/hugging feeling which Temple Gradin found was effective in calming patients with ADS. Further research from Harvard show that touch therapy can relieve ailments like muscle spasms and social anxiety.

On sleep in children with ASD, the study Weighted Blankets and Sleep in Autistic Children—A Randomized Controlled Trial did not find objective results of improved sleep with use of a weighted blanket, however, subjective measures found that parents and children both preferred the weighted blanket, possibly picking up on benefits that were not measured by the researchers.

6. Promotes Focus and Sleep for Children with ADHD

Children with ADHD can be easily distracted by whats going on around them, weighted blankets activate the sense of touch which can help minimise distractions by other sensory stimuli. A study using weighted vests, not blankets, worn by children with ADHD, showed improvements in attention span, task completion and reduced hyperactive movements.

Research from the National Center for Biotechnology Information into weighted blankets were found effective in reducing the time it took for children with ADHD to fall asleep and improved sleep time.

Weighted blankets apply pressure to the body to facilitate “grounding” or “earthing” of the body and creating a calming effect. Studies show that grounding the body helps reduce nighttime cortisol levels. Cortisol, known as the stress hormone, is produced when the body thinks it’s under attack, eliciting the fight or flight response. Lower levels of cortisol are involved in switching into the restful parasympathetic nervous system and lower levels of anxiety, insomnia, weight gain and depression.

Weighted blankets have a long history of use in a type of occupational therapy called sensory integration therapy. Weighted blankets are one tool therapists, and parents, use to provide the the calming feelings of comfort and security. The feeling of the tiny beads inside the blanket are intriguing to touch and the cover is soft and cozy.

The question of getting the comfort of a heavy duvet during the warmer months is finally answered. Weighted blankets provide you with weight from glass beads that do not trap or retain heat. Further, Groundd blankets are specifically designed to address this issue of hot sleepers but using only natural, breathable materials such as 100% cotton and bamboo Lyocell, unlike the commonly used polyester that is not breathable and traps heat.

Those suffering from PTSD often experience a variety of problems related to sleep including nightmares, flashbacks, anxiety, and restlessness. PTSD UK explains weighted blankets are used as an alternative to pharmaceutical treatments for these symptoms as well as the other benefits of Deep Touch Pressure from weighted blankets including alleviating anxiety and increasing serotonin.

The release of the feel-good hormone oxytocin combined with a decrease in cortisol (the stress hormone) from weighted blankets can have a significant effect on moods. Oxytocin plays several roles in the body from stimulating feelings of attachment and closeness, and generating a deep sense of calm to regulating our sleep-wake cycles and path to sleep.

Restless Leg Syndrome (RLS) tends to flare up with anxiety and also at bedtime. Applying pressure for an extended amount of time to the legs has been shown to ease symptoms of RLS meaning that weighted blankets have been found to be a good natural treatment for RLS.

If you are used to waking up from tossing and turning during the night, weighted blankets provide gentle but firm downward weight that reduces nighttime movement. This grounding effect of weighted blankets allows for a calmer nights sleep.

A well rested person with a clear calm mind, void of anxiety, is in a position where they are able to improve many facets of their lives, including boosted mental, physical & emotional performance. Let’s face it, when you are sleep deprived every part of your life becomes much more challenging whether it be getting along with your partner, taking care of your children, staying fit or performing well in your career. A weighted blanket may work for you to give you the rest and state of mind you need to perform at your best.

Scroll back to top